This video case study of shows how Human Focus have assisted Drainline to improve health and safety training for their workforce.

Drainline is a leading drainage maintenance and repair company. Human Focus have been working with Drainline’s Paul Monck, director of safety, health, environment and quality (SHEQ) since early 2020 to help them ”up their game” when it comes to health and safety training.

Drainline was founded in 2005 and the business has tripled its turnover in the last two years. So, what has brought about this amazing commercial success?

Well, Drainline used to look after Mr and Mrs Smith clients in the domestic market and still do. But, more recently, they have gone after long term tier one contracts with major construction clients such as Amey, Kier Highways and Balfour Beatty.

As Paul Monck points out, “this transition has required us to up our game.” To win this business they had to gain a wide range of accreditations in order to drive health and safety standards forward. As we will see in this article, the work that they’ve been doing with Human Focus, via their online health and safety system, has really helped them in this respect.

So what was happening in terms of health and safety training before Drainline began working with Human Focus?

Paul Monck explains that when he first started at Drainline and looked at their training matrix that it “scared him somewhat”. The problem was that health training was a hit and miss process and done out of necessity.

So for example, a client may have wanted particular health and safety certification courses which none of their work force held, which then meant they had to get on and do that training in reactive way. They were chasing their training needs rather than where they are now – able to plan ahead and schedule what training do we need to do ahead of time.

Being able to monitor the competency of a large workforce is clearly vital in demonstrating compliance with ISO standards as well as health and safety legislation. The first way in which Human Focus have assisted Drainline in this respect is to help the workforce share their training records with clients when they are out in the field.

This often proved a problem. Drainline workers used to lose their training cards. As you might imagine, there were are lots of reasons why they routinely struggled to pull out lots of different health and safety training certificates, including problems like leaving training cards in the washing machine, or, in a different work vehicle after a shift change.

Then, when their employees were audited, either by Drainline managers, or one of their clients, and they were asked to show their ‘competency tickets’ they struggled to provide the evidence. They would then have to ring up the office and ask someone to pull out the training certificate paperwork and send it over to them. This all wasted a lot of time and effort.

When Human Focus began to work with Drainline the first thing that happened was all of their workforce downloaded the Human Focus mobile app. Paul Monck says that this has provided a ‘wow factor’ for their employees because it means they don’t have to carry around lots of plastic training cards anymore. Now, the they can pull out their mobile phone and ask the auditor to scan their unique personal QR code in the home page of the Human Focus app. This immediately provides access to all their training records. Paul Monck says their workforce ‘love it’ as do their clients. As we have seen, a key foundation to Drainline’s impressive commercial success has been the ability to win tier one contracts with major clients. So, what have these clients said about this Human Focus digital training passport system?

Paul Monck says they have been impressed. For example, he recently spoke to a client in Northamptonshire at Kier Highways and says they have been mesmerised by the QR code training passport system, and the ability to gain instant access to online health and safety training records. This is clearly not the norm as many larger tier one contractors are still using paper-based systems to manage their health and safety training records system.

Being able to easily share training records via mobile apps has been helpful, but only one part of ensuring each employee is competent. Ultimately, what is required is a central database where all training records, whether online or off-line, can be analysed to get a comprehensive picture of competency.

And, this is another aspect where Human Focus have been able to help Drainline improve their compliance via a unique online training matrix that can store not just e-Learning results, but also classroom-based certifications.

Drainline don’t just train on the Human Focus online health and safety, they still have many off-line training records – such as standpipe training. Now, all of these off-line training certificates can be easily loaded onto the Human Focus training matrix as well, so that they are able to store and analyse all their competency records in a single database. At the tap of a finger via the QR code, anyone can then get instant access to these records.

For senior managers in Drainline it enables them to see a real-time training dashboard that tracks compliance of their health and safety training against menus of courses they have defined. This training administration module has sophisticated analytics that can track the competency of each worker against multiple job roles and skills profiles defined by Drainline. This information is used for management reports and board presentations. This automated health and safety training records management system has removed a huge amount of administration work and Paul says that for him “an absolute winner”.

Beyond training records management, how has the Human Focus system helped Drainline in terms of engaging their workforce and getting them involved in health and safety?

Paul Monck says it’s been of assistance in this area as well, “yes, it’s helped us culturally, definitely”. As he points out, getting people to change their behaviour as they work is always a tough challenge. So what progress has Drainline made in developing it’s safety culture? Paul Monck explains that since starting to work with Human Focus in April 2020 it’s now become normal for his colleagues to come and chase him and ask for more health and safety training – particularly when they have completed their assigned online safety courses. As he says, “rather than having to keep chasing them they’re coming to me for health and safety training which is a fantastic.”

In summary, Paul Monck says, the key benefits that Drainline has achieved through use of the Human Focus system are:

So, the three key benefits for Drainline have been – reduced time, money, and improved compliance.

If you would like to explore how the Human Focus online health and safety system can assist your organisation, including a demonstration, please get in touch here. 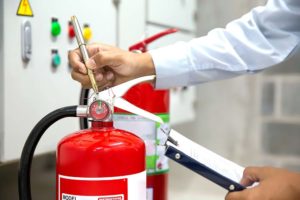 How Long Does it Take to Study to Become a Fire Door Inspector? Are You Meeting the Legal Requirement To Inspect Your Ladders? What are an Employer’s Legal Duties in Respect to PUWER Risk Assessment?
24 Jan at 5:48 am How Important is Mental Health in the Education System?
7 Jan at 9:11 am
Menu